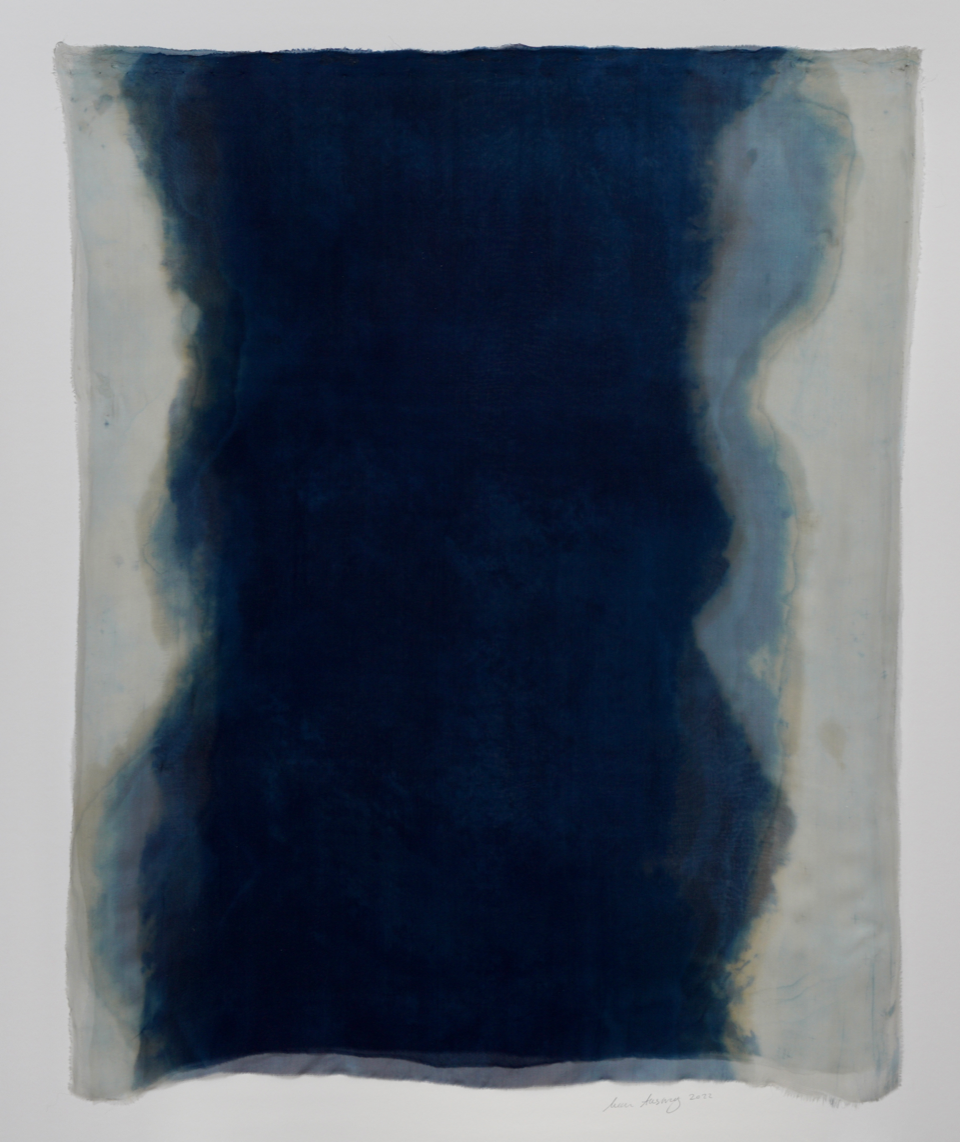 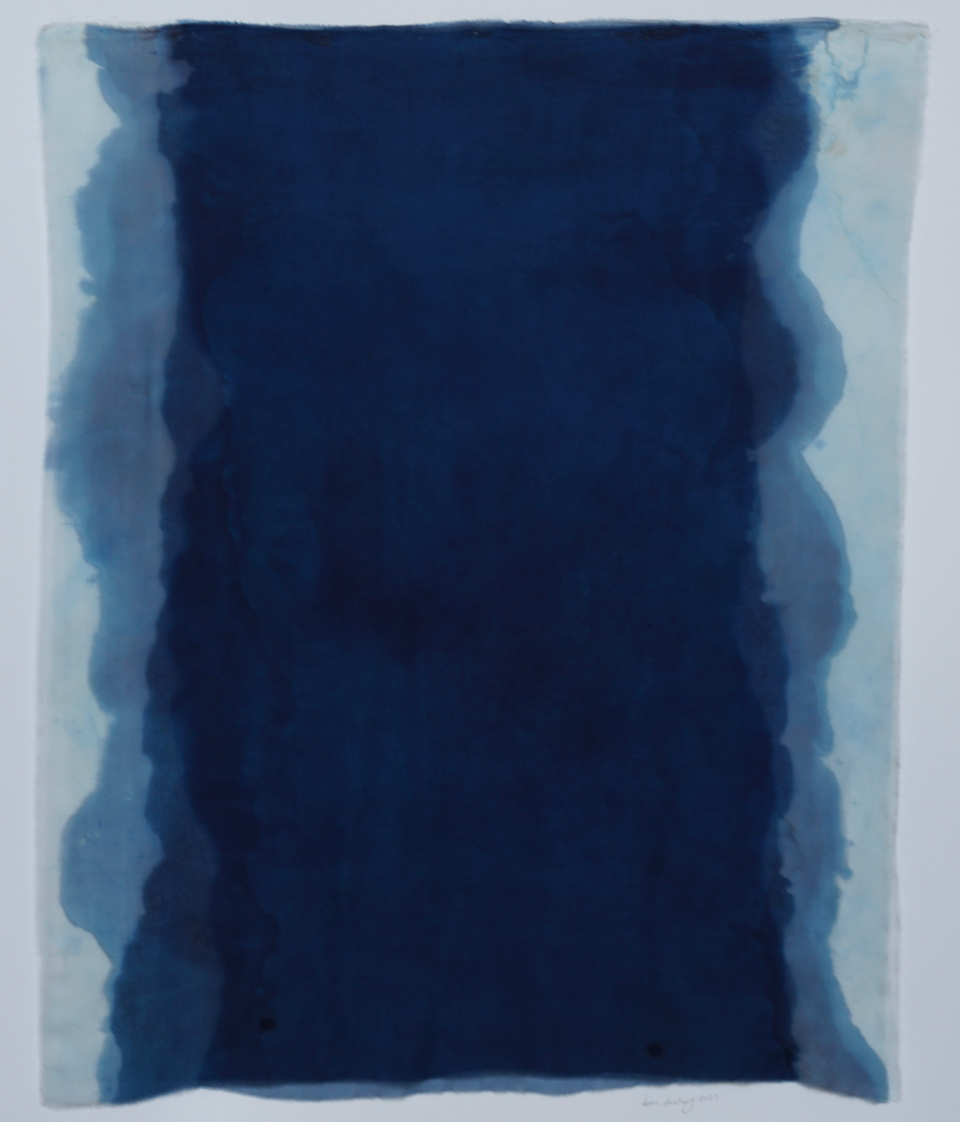 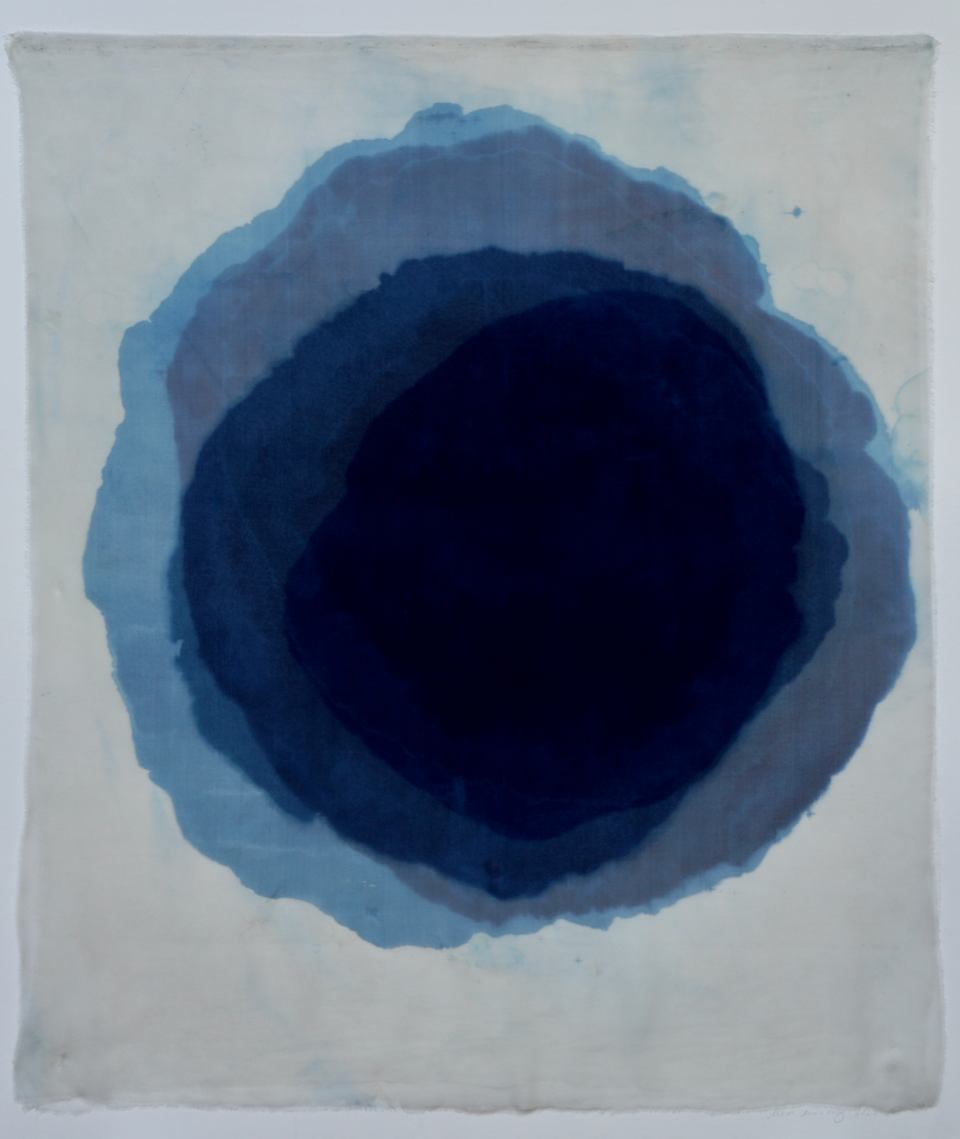 They Only Come Out at Night V

The Power of Green 1

130 pieces of wood with pastel and solar lights,

Strung Out, Roped In

The value of a forest is not in the value of the lumber it contains.  The crossed-out equations are timber cruising formula used for calculating harvestable wood in a forest.  The graph at the bottom is the Stillaguamish River gauge height for one year.  The red line running through the trees is a map of the river near Smoke Farm.

A self-portrait from a 5-day trip down the Yakima River.  The surface of the water is decked with research data, reports, and policies about a river that has been pushed to its limit as a natural resource.  The entire piece is made from document-sized 8-1/2x11 inch pieces of canvas.

In the Doll House

A man standing in front of a diorama of Wilcox Pass in the Canadian Rockies.

The “mountainous” background is the daily average travel rate for a Porcupine Caribou Herd cow for a one year periods.

My practice is grounded with our relationship to places, revealing sites I investigate using an artistic perspective of the senses. The use of the physical body is paramount as I hinge my senses more directly through touch and sound, threading my way through a place, it becomes an outline of work. I consider these as sensorial mappings. The sense of presence is an integral ingredient for my work. Like the Wayfinder, our retention of sensory experiences with the earth is participatory, remaining connected to land/place for its/our preservation. My practice of sensorial connection engages with the place as both a witness and a voice.

I utilize both community and the elements as collaborators within my practice, addressing time, weather, place, and loss. The work made from these journeys are extensions of the physical presence of sites, recording the actions, moments in time. Standing on iced waterways, imprinting these actions to recognize the existence and loss of the surface. The all-encompassing weather is the constant that unites us; we experience all its diverse effects. Weather defines us as indifferent and unpredictable, a constant shapeshifter, touching places and spaces, who stand like silent monuments witnessing.

The work Breath of Place investigates the sensorial concepts of touch through the corporal experience, touch being felt as a physical element of action, as well as recognizing touch as a vibration through sound. Allowing a porosity of both the self and sound to touch, as vessels, hinges us to the proximity of place. Through this reciprocal action of touch – mapping that action into the working process, the work becomes a collaboration between self and place. Acknowledging a permeability within these senses, recording these connections, mapping an embodied cognition of touch and the resulting ice erasure.

My current pursuit involves the creation of images by extracting (editing) a portion of digital smartphone photograph and using a layout application to duplicate and manipulate the selected portion. The goal is to create an image that captures the attention of the viewer through the resulting design elements and color palette. I do not use any post-photographic color filters, relying only on the initial digital image as captured by the device. I have applied this process to both inanimate and animate objects, with the later images the focus of this exhibition.

I want the viewer to have a sense of wonder and awe when looking at my work.  We have all at one point or another picked up a stick from the ground—touched the wood, and peeled the bark off with our fingernails.  My work taps into that same primal desire of touching nature and being close to it. Over many decades I have created a unique technique of working with wood—my primary material.  To craft my work, I usually begin with a drawing. I start out each day collecting tree limbs and sticks that have fallen to the ground. I never chop down a living tree or use green wood. Next, I debark the branch and look for shapes found within each piece of wood. I then cut and permanently join these small shapes together using dowels and wood glue. Then, all the open joints get filled with homemade putty and sanded. This process of putty and sanding usually needs to be repeated at least three times.  It is a very time-consuming process and each sculpture takes me a minimum of a month to build. The sculpture that is being constructed appears like my original pencil drawing but in space. I am interested in having my work appears as if it grew in nature, when in fact each sculpture is usually composed of hundreds of small pieces of wood that are seamlessly joined together.  My work can be called the ultimate recycling: where I take the detritus of nature and give it a new life. My influences are many: from looking at the patterns in nature and plant life on this Earth to researching the heavenly bodies in the images beamed back from the Hubble Telescope; from studying mysterious manuscripts from the early 15th century to delving deeper into images from quantum physics; All these influences inspire me daily.

Some of the work I am exhibiting here is from my Nature Will Heal series.  Nature Will Heal portrays our planet and the impact humans have had on our precious ecosystem. I believe that Mother Earth has the ability to eventually heal our planet of all human-induced pollution, but there is no guarantee of continued human existence if we don’t heed nature's call. With this series, I’ve taken the detritus that can be found in our daily lives and turned that garbage into the central seed of a yet-to-exist hybrid plant form. This new plant form is now growing around the seedpod, consuming and transforming what was once waste into a flowering structure … nature will heal.

My work is concerned with the experience of living in a particular moment and how it informs the perceptions of space. Interactions in a place include not only its physical attributes but the memories, intentions, and awareness of all that came before. A blending occurs; consolidating all into one.

Humans have made an impact on our natural world (whether we like it or not). Where I live, garbage washes ashore and embeds itself under tree roots and within the sand and seaweed. Constant reminders that humans have been here are integrated into the land. My work alludes to this reluctant yet habitual collaboration of humans and nature. With each piece, I create a new ecosystem; one that properly acknowledges our world as it is right now, including the detritus that washes ashore becoming part of the land.

These paintings and wall sculptures reference nature in its current state: bold, untamed yet embedded with human interventions. They are constructions of the imagination that include within their layers systems of patterns found in the deep recesses of the natural world. I am interested in environments; how they are created and for what reason. My concern lies in the spaces they occupy: the amalgamation of chaos, distinct hues and the banal beauty of the ordinary discovered when you look close and pay attention.

The reality of nature today is one infused by the actions of humans. My work is about seeing this interchange and unknowing the way that we see it. Always, I’m thinking of how these paintings can convey the experience of the present moment.

I am a self-taught multidisciplinary artist working in a wide variety of themes including nature and natural sciences, politics, history, and archaeology. Originally working in hand-sewn beadwork, I have added mixed media, photography, video, drawing, installations, and hand-surveyed-hand-drawn maps to my skillset. My work is strong in concept, content driven, often narrative and accessible, and the resulting artworks can be more deeply layered in meaning than it first appears.

While my artwork often appears to be carefully planned, I tend to build my work intuitively. As work progresses, I often find the subject to be more complex than it first appeared and intertwined with other issues and ideas. Projects evolve as they progress and the resulting artwork is, to some extent, a documentation of my own learning process. Rather than working in a particular medium, I use whatever medium I can figure out to best tell the story, and I often put significant time into learning new techniques.

While living in the Pacific Northwest, I began working with a process of environmental exploration and creating artwork by documenting my discoveries. These projects intellectually and emotionally explore the idea of wildness, wilderness, and mankind’s often counter-productive relationship with nature. I moved to Connecticut in 2012.  Most of 2019-2020 were spent working a new bead embroidery work, ‘Trade Route’.

Stay up to date with news, exhibitions, events and more.